In July 2021, two students and one teacher from Laurea’s Safety, Security, and Risk management degree programme took part in a Summer School organized by the Cooperation Network for Risk, Safety & Security Studies (CONRIS). The Summer School was held in Barcelona, Spain and the article gives an overview of the course from a student point of view and promotes the possibility for short mobility and importance of internationality.

The Cooperation Network for Risk, Safety & Security Studies (CONRIS) was established in 2009 to improve cooperation opportunities between higher education institutions (HEI) offering accredited degrees in Safety, Security or Risk Management. The original members in the network were from Austria, Germany, and the Netherlands, but the network has expanded ever since to include HEI’s from Belgium, Spain, Poland, Croatia, United Kingdom, Norway, Hungary, Russia, and Portugal. Laurea University of Applied Sciences (UAS) from Finland joined the network in 2014 (CONRIS 2021).

The working nature of CONRIS is informal and unofficial, but through the network it is possible to create official partnership, such as Erasmus+ academic student and staff exchanges. In addition, under the banner of the network, CONRIS Summer Schools have been organized with a rotating organizing responsibility. Each summer school has been approximately weeklong, with a handful of teachers and around thirty students attending total. They have been organized consistently since 2014, the only exception being Summer School 2020 in Barcelona, which was pushed back to 2021 due to the COVID-19 pandemic. Coincidentally, that particular Summer School is the subject of this article. Read on to find out about the experiences of both students and staff attending from Laurea University of Applied Sciences.

We are Emilia Niklander and Sini Waitinen, two students from the Safety, Security and Risk Management programme at Laurea UAS. We took part in the CONRIS Summer School 2021 in Barcelona as students. This chapter, along with the agenda discussions of the goals, are written from our perspective.

All students in our programme were offered the chance to apply for participation to the course. At first, we were not quite sure if the pandemic would allow us to travel to Spain but luckily, we made it in the end and got to experience something unique. During the week we met international students from other HEIs. Unfortunately, due to the pandemic the number of participants was lower than what could have been – about 20 instead of 30 – but we still were able to meet and collaborate with students from other countries, mainly from The Netherlands, but also from Belgium, Norway, and Germany.

The HEI in charge of hosting the Summer School this year was Universitat Autònoma de Barcelona. They had arranged accommodations from the heart of the old town, at El Raval. That location was appropriate to the topic of the summer school: Social Approach to Urban Security. This was appropriate because El Raval is often quoted as the most dangerous neighbourhood of Barcelona. For example, the online news site The Local (Lizanda Herrera, 2018) says as much…

The course officially started on Monday at a local community center, Ateneu del Raval, with some lectures. First, we had a lecture by Joaquín Rodríguez, the local professor in charge of the summer school, and later we had a local police officer talk about issues and causes of crimes in Barcelona. The first day was already very eye opening as we were offered a point of view that tourists normally don’t get. We got a deeper view of the causes of many crimes and how society and the government could provide a safer environment for everyone with some changes in the procedures. We were also divided into small groups for some tasks. We had to answer some questions based on the lectures, and then share our thoughts with the class.

On Tuesday we had some more lectures at Ateneu del Raval. We learned about inequality and its effect on safety and security, and that by increasing equality in the society many crimes could be avoided, or at least the amount could be decreased. After the lectures we had a chance to visit an exhibition of a local artist so that we could see in practice what we had learned in the previous lecture. The exhibition was touted as the first one in Barcelona to combine feminism and anti-racism, both of which make the society safer for all members by giving all the individuals the same possibilities.

On Wednesday we visited an old factory building that had been taken over by the local community. They had turned it into a space where the people can cook, exercise, and spend time together. We also visited an abandoned territory that the locals had turned into a community garden to grow fruits and vegetables and offer a hobby area for children and the elderly. This day showed us the power of the community and how having people around plays a big part in creating safety and security to any area.

On Thursday we visited Hospital Sant Pau. It was the first hospital in Barcelona that brought together people of all social classes and that way contributed to the local safety as well, since everyone was welcomed in Sant Pau. Currently, it is part of a UNESCO World Heritage Site and a museum. In the afternoon we went to Ateneu del Raval again for some additional lectures and started to prepare our group presentations for Friday. On Friday we traveled to the campus of Universitat Autònoma de Barcelona to give our final presentations and received a certificate of the course.

The goals were met, and expectations exceeded

Our decision to participate in the course was easy for the both of us because of our international background, but also because of our interest in the theme of the course. The purpose of the course was to introduce us students to the social issues of urban security and to encourage us to think about alternative approaches to subjects such as crime prevention amongst the youth, immigration, poverty, and inequality in the society.

Our expectations towards the course were quite similar: we thought that there would be mainly lectures, a lot of material to be read, some group work maybe and an exam. In the end we realised that neither of us had really known what to expect.

Our goal was of course to learn about security issues and to network with other students, but we were positively surprised, that even though we did have some theory, lectures and presentations, the course was more about experiencing the differences in the society, than sitting in a classroom, reading, and hearing about things in a theoretical level.

The course included many visits to places maintained by the communities, such as gyms, gardens, and bars. We got to meet people with different backgrounds and hear their stories and see what kind of issues they were fighting against. In the end we got to see a different kind of world and a unique setting for the security issues in a versatile city like Barcelona. We did not only get to see the city from a tourist perspective but also from local perspective.

In the end the course offered a deeper understanding of the root causes of crimes in Barcelona by letting us visit local communities, learning about the lecturers’ own personal experiences and supporting the theory with practice. As mentioned above, as a tourist we never would’ve had a chance to gain such a deep understanding of the issues that affect the safety and security of the city. Understanding the underlying issues in society gave us tools that we can use in our future studies and even careers. By understanding the root causes behind criminal actions, we can try to change things and therefore prevent said actions.

From a teacher’s perspective – adding your value

The summer course was, in my experience, organized in a thoughtful but appropriately reactive fashion. This means that though much work was done to schedule the week, we were not constrained by rigidity and indeed we had to be very flexible in case of schedule changes (not to mention possible COVID restrictions). Much of the places we visited were run by volunteers and local activists, which meant that we needed to be respectful of their time and commitments. The guidance and teaching support I aimed to provide was therefore provided often off the cuff.

My own lecture during the week was held on Thursday, and it evolved quite a bit during the week. The idea was to give light to an issue that was parallel, but not identical to the content of the summer course itself. The topic was “Framing Security”, and the idea grew from the basic premise of the summer school. In a nutshell, the idea was to discuss how in media, discourse and within organizational security, security issues are presented from a certain perspective.

Urban crime was discussed otherwise during the week extensively, so I selected three other security-adjacent topics: terrorism, immigration, and homelessness. All these topics were touched on during the summer course. In the picture below, you can find an example on how “homelessness” could be framed, depending on the context the person or entity discussing does it – consciously or unconsciously.

The “problem of homelessness” then depends on who speaks about it, in what context and what intention do they have. Another example was immigration, which could be presented almost exclusively as a local security or security policy issue, overlooking labour policy for example.

Short courses in internationality can be efficient, as they make it possible to have a packed experience and a perspective shift in a very short time. In this case, that perspective shift specifically was noticeable, and the feeling of all authors is that this whole week was worth it for that alone. We would highly encourage students and academic staff to attend events such as these, as they contribute greatly to professional growth. 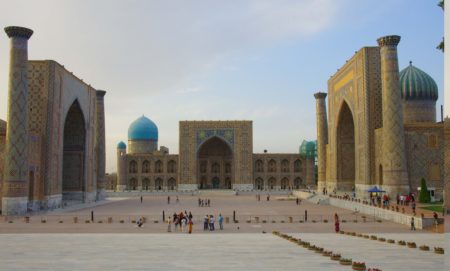 Destination Uzbekistan: facts and feelings from a project mobility

“Wow, that sounds really exotic and exciting! Where is that?” I heard numerous times when...