RADAR-iTE, The Radar of Islamistic extremism, is German Federal Police’s relevantly new-found second-generation assessment tool for the recognition of the extremist Salafists. The tool was developed in Germany in cooperation of the Federal Police and a group of forensic psychology from the University of Konstanz. During spring 2018 the method was explored in Laurea University of Applied Sciences through a Bachelor Thesis work. The aim of the thesis was to introduce an instruction card of RADAR-iTE method for educational purposes. The collaborative partner and commissioner in the development work was the Police Department of Berlin. The instruction card is planned to be used for the commissioner’s and general police training purposes mainly in Germany. It is targeted for people who are using the risk assessment tool for the first time or are having their first case and need reminding and concentration of using RADAR-iTE assessment tool.

RADAR-iTE has developed since 2015 and was established nationally in Germany with help of a wiki-service in summer 2017(Bundeskriminalamt 2017 & Küster, R. 2018). According to a published statement in Welt 12 June 2017, it is said that the Federal Criminal Police has introduced RADAR-iTE as an assessment tool that is the first nationwide assessment of the Militant-Salafis known to the German police (Flade, F. 2017). In this point of view, it points out great usability for the assessment, as RADAR-iTE does have a great chance to minimise the communication gaps between bureaus inside the province of the 16 German states with different legislation between them.

RADAR-iTE is based on two-stage assessment, conducted by the police authority. In the first phase of the assessment, information is collected from different sources following with the phase of filling-in a questionnaire. The questionnaire includes e.g. questions about events of personal life, social groups and activity in the society, as well as the evidence of Jihad motivated travelling, violent background, history of mental illnesses, access to weapons and the military experience. According to findings, there are three categories of a case-specific threat level of extremist Salafism. The categories are moderate, increased and high level of threat. These categories are used in order to find out the need of an intervention. The category is also stating the timing of following assessments depending if the person is found endangering or relevant.

The instruction card was created in order to encourage beginners and new users to start using the assessment tool in their police work. Also, for the method is used to profile people, it was found important to ensure through systematic training that all users know the existing technical and ethical guidelines as well as applicable legislation regarding the data collection and assessment. The instruction card created as thesis work, guides the user to open and official sources that are available for the detectives and authorities working with the case. Such sources open to the authorities are the judicial convictions, criminal history records, altercations with the police, information from the probationary office, data from National gun register and data from Department of Homeland security or Immigration office. Other public sources are for example social media, media content relating to the person, information from other public sources and information from associated persons. However, even when dealing with public sources the information is used for different purpose that it is published for and therefor when it is combined to other pieces of information, it becomes crucial to have transparent procedures throughout using the method. The instruction card includes this aspect, but since the thesis was written from the point of view of creating an instruction card not from the point of view of developing the method itself, it is not a matter more closely discussed.

In thesis, the instruction card was developed through introduction of the German forensic psychology (Itälunni, J. 2018) and the second-generation risk assessment methods (Itälunni, 2018). After proceeding the practice research there were three prototypes sketched into different segments of information level and graphical illustrations. Protype 1 had more narrative touch of illustrations, combined by decreased amount of words. Prototype 2 had a separate ribbon of illustration. The point of separating the text from illustrations, was for allowing more detailed information on an instruction card, and to help the user to recognise the important points of instruction. Prototype 3 was most artistic approach of illustration combined with the most demanding level of information.

After the prototypes were put together, active cooperation between the author and contact person of the commissioner continued and the first corrections were made. Also a meeting with the representatives of the Police Department of Berlin, who actively deal with the assessment, was organized in order to receive feedback. In the meeting, the prototypes of the instruction card were first presented to this group of stakeholders. This offered a possibility to find the most suitable and reviewed alternative for further development of the instruction card.

In result of the meeting, it was agreed that the final version of the instruction card should include the design from prototype 1 with tables of prototype 3. Additionally, one table was adjusted by information received from the representatives of the Police Department of Berlin. As the language used in the instruction card was German, it was language wise checked by a native speaker. 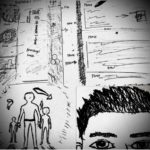 From the users’ point of view, the new instruction card of RADAR-iTE is suitable for employees who are either fresh users of the method or proceeding with the first actual case with the assessment tool. This is expected to serve the need to recognise a person that is likely to commit violent behaviour and to proceed with Salafist motivated movement. The process of creating the instruction card has clearly answered to a need of working life. As a whole, the process gave an opportunity not only to the thesis worker, but also to the thesis supervisor to familiarize with and to learn more of this specific field by developing it. Especially, as the field is quite sensitive with a lot of confidentiality issues, it is not often that this kind of opportunities come up. As so, the thesis process has most definitely benefitted the organisation of Laurea by adding knowledge and understanding of the issue. This process mainly evolved Germany, but the phenomenon is known widely and it is safe to say this is a topical issue. Further exploration has already begun, and the future will show if and what kind of effect the creation of the instruction card has on the wider scale in favor of the RADAR-iTE.